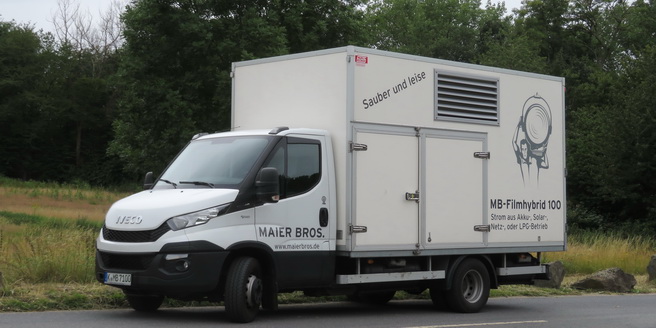 The MB-Filmhybrid heralds the next generation of environmentally friendly hybrid power generators for the film and media industry. It combines different operating modes in a unique way. With small to medium loads (up to 12KW), the system is completely supplied by the battery pack. This has a system capacity of 24KWh, of which at least 12KWh can be used in everyday operation. If, for example, only a few camera batteries and cell phones are charged on an outdoor day shoot, the total output is around 0.5-1.5KWh. With this load, the battery capacity is sufficient for a full day of shooting.

As soon as the load requirement increases or the batteries have to be charged, the LPG (liquid gas) powered generator starts automatically. This has an output of 88KVA, is significantly quieter than conventional Super Silent film generators and, thanks to the gas engine, has very low emissions (no fine dust, hardly any nitrogen oxides and significantly less CO2).

The vehicle engine was extensively converted to LPG so that only one type of fuel (LPG) has to be filled. The supply for the fuel LPG is ensured by a dense network of filling stations and LPG is significantly cheaper than e.g. diesel fuel.

– built as a self-propelled machine with a total weight of 7.2 t (very mobile and flexible)

– problem-free use in nature reserves

– Solar> always as soon as available

– Network> always as soon as available

– Batteries> as long as possible

– LPG engine> as soon as there is additional demand

Why LPG instead of CNG? Our goal was to develop a self-sufficient film power generator that can deliver electricity for at least one long day of shooting at 90% full load. After much research, the only chassis that came into question was the Iveco CNG 7.2t, as its engine is already designed for gas operation. CNG is stored in gaseous form at 200bar, so the tanks would have weighed 6 times as much as LPG tanks and required 2.5 times the space. So it would not have been possible to accommodate the required tank capacity on the Iveco 7.2t. With the decision for LPG and the Iveco CNG 7.2t, we had to convert the chassis to LPG so that two different fuels do not have to be used. This hurdle had to be overcome in the course of the development and after 6 months of tinkering the chassis ran with LPG. Film units are often used in remote areas where there is no other power supply. The fuel supply was therefore an important decision criterion. For LPG there is a ten times denser filling station network than for CNG, which is particularly important for filming in rural areas.

For the batteries, we opted for high-tech lead gel batteries. These are significantly heavier than their modern relatives lithium ions or lithium iron phosphate. But they are not considered dangerous goods, are much more robust and have a higher temperature tolerance (LiIon or LiFePo batteries require active temperature management).